Inclusion Europe fundraiser to help people with disabilities in Ukraine has provided €630,000

Ukrainians with intellectual disabilities and their families surviving the war

When Russia launched its full-scale invasion of Ukraine on 24 February, Inclusion Europe was in close contact with our member organisation VGO Coalition. Based on their description of the situation and needs, we decided to facilitate financial support for people with intellectual disabilities and their families in Ukraine: Help Ukraine fundraiser was launched shortly after.

During the first 100 days of the war, VGO Coalition received 60,000 euros from this fundraiser. This money allowed the VGO Coalition to pay for:

More donations were transferred to local NGOs (members of the Coalition) to provide even more individual financial assistance to families, pay for the services of personal assistants, basic necessities, and resume services.

Many of Inclusion Europe members supported the initiative; organising their own fundraisers to contribute, making donations, organising events to collect from the public etc. The fundraiser has received support from organisations and individuals outside of Europe too, with support from Inclusion International, Inclusion Canada, The Arc of the Unites States.

Inclusion Europe made the first transfers on 8 March.

VGO Coalition use of the second tranche of the money

40 organisations (members of the VGO Coalition) received subgrants from the money provided by Inclusion Europe fundraiser:

Following support was provided to Ukrainians with intellectual disabilities and their families with money from the fundraiser:

Part of the money was also used to pay for repairs of war-damaged buildings where services are provided.

All this aid and collective effort to provide assistance to people with intellectual disabilities and their families in Ukraine has been extremely helpful. We want to thank all of you!”

The VGO Coalition also provided these 2 videos for our Europe in Action conference (September, in Brussels):

Tags:
EmergencyUkraineVGO Coalition
About The Author 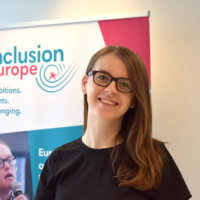