Leadership training: Make the right to vote a reality for people with intellectual disabilities!

Yann Deschamps, a self-advocate from France, made his demand clear at the leadership training Click here for the easy-to-read version “A fellow self-advocate once told me: ‘I don’t feel equal to the others because I’m not allowed to vote!'” Inclusion Europe’s board member László Bercse got to the heart of the topic during his presentation... 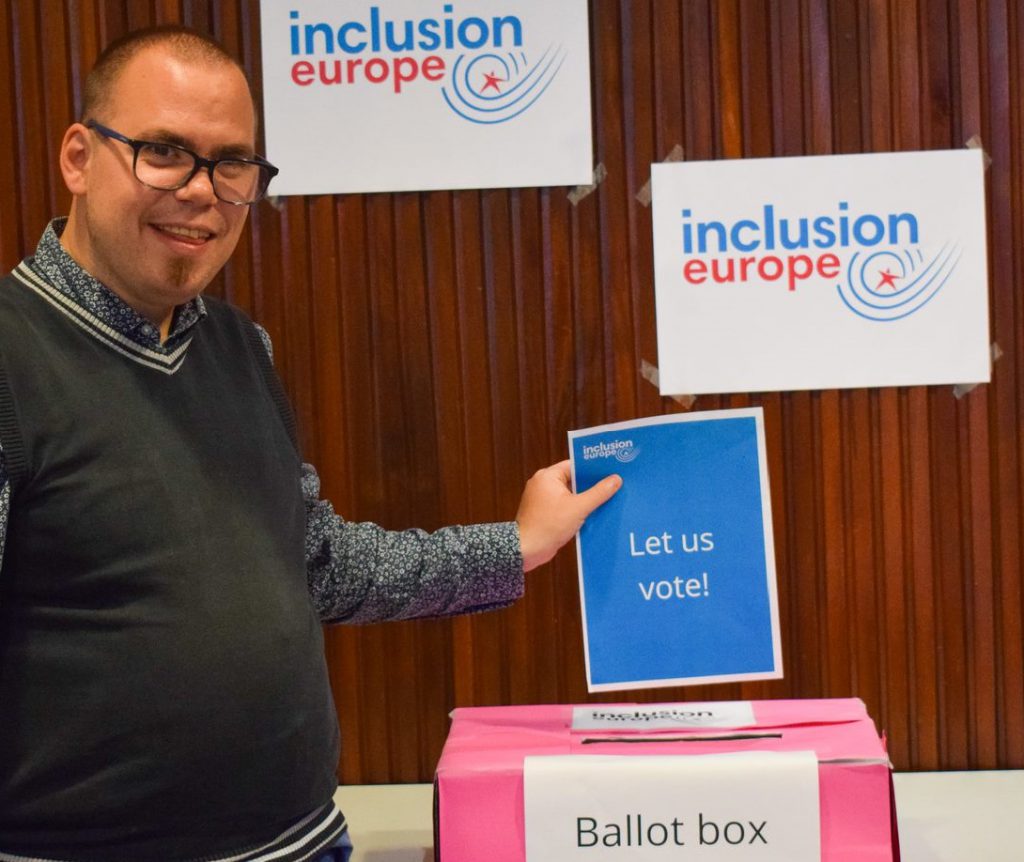 Yann Deschamps, a self-advocate from France, made his demand clear at the leadership training

“A fellow self-advocate once told me: ‘I don’t feel equal to the others because I’m not allowed to vote!'” Inclusion Europe’s board member László Bercse got to the heart of the topic during his presentation at this year’s leadership training, dedicated to elections and the right to vote: Voting is a fundamental right, it is one of the most important ways of making one’s voice count. Withdrawing this right from someone means not recognizing them as equal citizens.

In the run-up to the European elections in 2019, with some countries like Spain changing their electoral laws thanks to pressure from activists, the issue has gained significant attention. The topic of the 2018 leadership training therefore sparked a lot of interest: Nearly 30 self-advocates, family members, supporters and professionals from 10 European countries came to Brussels to prepare for the upcoming elections, and meet with representatives from the European institutions and political groups to share their views.

Accessibility of voting: a challenge 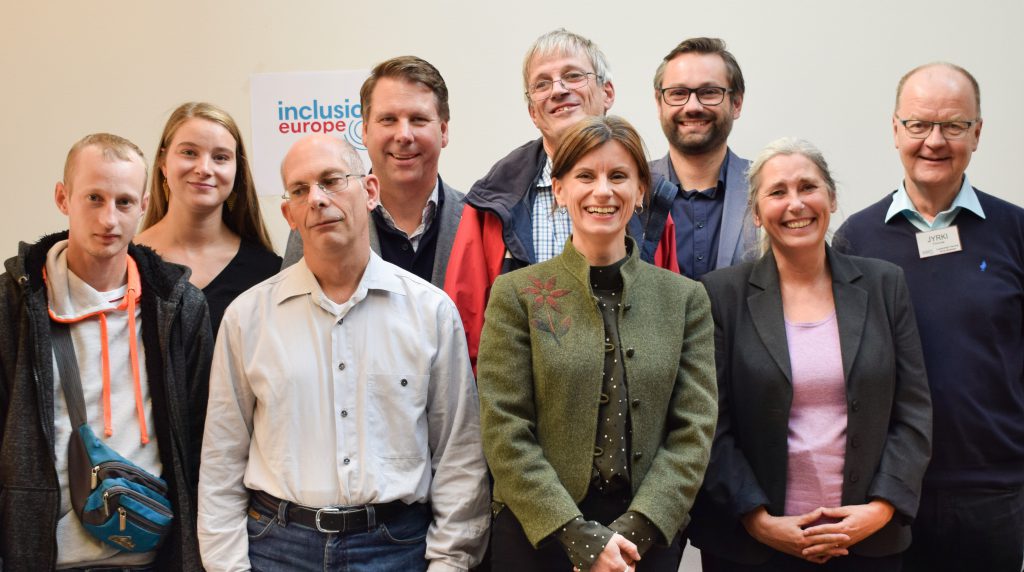 Some participants at the leadership training with Jyrki Pinomaa, Inclusion Europe’s President.

During the 3-day training, participants had the opportunity to compare the situation in their home countries. In many European countries, people under guardianship do not have the right to vote. But even in countries where the vote has been opened up, accessibility of voting remains a challenge: Issues raised included the lack of easy-to-read information on voting procedures, candidates and party programmes. The absence of support staff on the day of the election was also mentioned.

Addressing these shortcomings is one of the demands of Inclusion Europe’s election manifesto, which self-advocates and family members analysed during the training. They also talked about topics such as “How can the European Parliament candidates include and involve us in their campaigns?” or “What can politicians do for people with intellectual disabilities in the European Parliament?”. Participants also learned about the functioning of the European Parliament, its political groups and committees.

⁦@OwenshIne⁩ has been contributing to ⁦@InclusionEurope⁩ election manifesto for upcoming European Elections – ‘if candidates support us – they will get our votes – they will then have a chance to make to make a difference to our lives’ #LStraining ⁦@Mencap_NI⁩ pic.twitter.com/0AgUtGw2Hg

They could directly apply their knowledge and deliver their messages and demands when meeting representatives of the European institutions and political groups on the last day of the training, namely:

Self-advocates and family members made it clear to them how important it is that adaptations are made so people with intellectual disabilities can enjoy their civil rights and go vote.

Participants appreciated the opportunity of being able to share their experiences and concerns during the meetings.

They went back home even more determined than before to make the right to vote and actual access to voting a reality for people with intellectual disabilities in their home countries.

Like every year, Inclusion Europe hosted
a leadership training in Brussels.

meet to talk about many things.

This year they talked about
the elections for the European Parliament
and the right to vote
for people under guardianship.

Voting is a very important right.
When you vote, you can have your say
on how your community works
and on what should change.

If the right to vote is taken away from you
it means you’re treated differently
from the other citizens.
This is not fair.

László Bercse is a member of the board of Inclusion Europe.

He said that a friend of his
once told him he felt different from other people
because he wasn’t allowed to vote.

Right now, the right to vote is a very important topic.

It is important for these reasons:

– There will be elections for the European Parliament next year.

As many people as possible should be allowed to vote.

– There have been some improvements in different European countries.
For example, in Spain,
organisations and self-advocates worked very hard
for a change in the law on elections.
Now people under guardianship in Spain
will get back their right to vote.

Because the topic is so important,
many participants
came to the leadership training
to talk about the right to vote.

There were self-advocates,
family members, support people
and people who work on the right to vote.

They had the chance to talk about
what’s going on in their own country
and learn about what’s different abroad.

In many European countries,
people under guardianship
do not have the right to vote.

In other European countries
people under guardianship
have the right to vote,
but voting is not accessible.

Why?
For many reasons:

These problems must be solved.
This is written also in the manifesto of Inclusion Europe.

Self-advocates and family members
talked a lot about the manifesto
during the training.

They also talked about other things,
such as:

On the last day of the leadership training
the participants met politicians
and people who work at the European Union:

Self-advocates and family members
told them very clearly that
we still need many changes
to be sure that people with intellectual disabilities
can enjoy their right to vote.

Participants were happy to have the chance

to share their experiences and concerns
during these talks.

They went back home
even more willing than before
to make the right to vote a reality for all
and to make voting accessible
for people with intellectual disabilities.