Everyone has the right to decide on their own body and make their own reproductive choices. But an alarming number of women and girls with disabilities have been, and continue to be, denied these rights through the practice of forced sterilisation. Women with intellectual disabilities are specifically at risk, because they often lack access to information on sexuality and sexual health.

The UN Committee on the Elimination of Discrimination Against Women (CEDAW Committee) has tackled this issue in its updated general recommendation on gender-based violence, General Recommendation No. 35.

The text contains several references to women and girls with disabilities and the particular issues they face when it comes to gender-based violence.

First of all, the Committee describes sterilisation, as well as other medical procedures performed on women with disabilities without informed consent, as gender-based violence. It demands that states repeal any legislation that allows, tolerates, or condones this violence.

The Committee also takes a stance on guardianship – a system which can hinder women to speak out on abuse they suffered: It asks states to repeal any laws that deter women from reporting gender-based violence, including “guardianship laws that deprive women of legal capacity or restrict the ability of women with disabilities to testify in court.”

Finally, the Committee asks states to implement accessible protection mechanisms to prevent further or potential violence. This should be done, for example, by removing communication barriers for victims with disabilities. The Committee also calls on states to develop and disseminate accessible information, about legal and social resources available to victims.

Inclusion Europe welcomes the updated General Recommendation of the CEDAW Committee. Women with intellectual disabilities are a group which is specifically vulnerable to (sexual) violence and must be protected.

Our project “Life after Violence” deals with the question how women who have suffered violence in institutions cope with it after leaving the institution.

Everyone has the right to make their own choices about their bodies.

A lot of women and girls with disabilities are not allowed to make choices about their bodies.

For example,  often they cannot decide if they want to have children or not.

Sometimes, women with intellectual disabilities are kept from having babies

because of something called forced sterilisation.

Sterilisation is when women and girls have an operation

Forced sterilisation is when women and girls are sterilised

is a group of people working at the United Nations.

They want to stop discrimination against women.

The Committee writes about forced sterilisation.

The Committee also writes about women with disabilities.

it is called gender based-violence.

Gender based violence is violence that happens to women more than men.

It happens to women because they are women.

Other examples of gender-based violence are:

that allow or support this kind of violence.

The committee also talks about guardianship.

A woman is under guardianship, and she has been raped.

This means someone had sex with her against her will.

She wants to go to court and say who raped her.

Sometimes, she can’t do this on her own because she is under guardianship.

Sometimes, what she says doesn’t count in the court because she is under guardianship.

You can see how guardianship can be bad for a woman who wants to talk about violence.

This should be done by helping women with intellectual disabilities

talk about what has happened to them.

and programs to help victims.

Inclusion Europe thinks that violence is often done to women with intellectual disabilities.

Inclusion Europe also thinks that we should protect

women with intellectual disabilities against violence.

Inclusion Europe has a project called “Life After Violence”.

This projects looks at how women feel after leaving institutions

if they have had violence done to them.

Tags:
Legal capacityLife after ViolenceViolence against women
About The Author 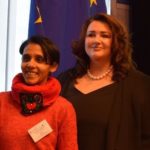 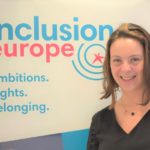