On resilience. Impressions from Europe in Action conference

Resilience rooted in individual strengths, and augmented by the support from other people. Milan Šveřepa about his impressions from the Europe in Action to End Segregation conference.

Milan Šveřepa about his impressions from the Europe in Action to End Segregation conference:

Oh, it was so delightful to have people around for the 3 days of our Europe in Action to End Segregation conference last week.

To be able to see and feel the other persons reactions, emotions, body language.

To feel the energy in the room when everyone gets to sit down and talk to one another about the good work in their respective organisations. And about which areas of inclusion in our countries cry for improvements (quite a few, actually).

Enjoying the time together

As you can imagine, most of us at the conference haven’t seen one another in flesh these past 3 years.

Some came to Brussels from countries where they have been mostly living in lock down this whole time. Self-advocates who haven’t been able to leave their house properly, to visit others with intellectual disabilities (both those who live in institutions and in the community) because of persisting Covid restrictions.

Some came for their first Europe in Action. Others spent time with their friends and colleagues trying to remember how many Europe in Action conferences they attended before.

Some (me, really) were just relieved that it all seemed to work out.

People looked happy to be here, enjoying the time together, and the good conversations. 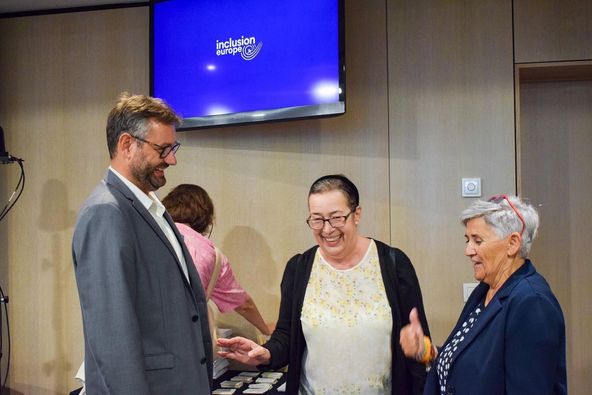 It was a great pleasure seeing so many kinds of people mingle and take part in the program. This includes all the self-advocates, a lot of whom don’t speak English and rely on their supporters for interpretation. (Huge Thank you! to all of you by the way.)

Of course, we still have to improve. There are experiences and lessons we’ll take into the next event.

The main one: Less is more Milan, and you need to remember it and stick to it, especially when getting excited about this or that item on the agenda.

Less speakers and less topics put into one event is more time for everyone to express themselves, and to listen to others. To have a proper conversation.

When I was writing some notes down about the first day, one word, a theme really, came to my mind. And it hasn’t left since: Resilience. Or grit. Or determination.

The will, and power, and determination of people to persevere despite all the bad stuff (and I mean really bad stuff) our societies through at them.

Resilience rooted in one’s own personality and hard work, and augmented by the support of others.

There is a common narrative of resilience/grit/determination that is only about the individual. About working hard, not giving up. And to large extent, it is true. But it’s also reductive, and it makes resilience into something individualised, extraordinary. It makes it hard for so many to see “I can be that way too”.

What makes the hard work and the will to not give up possible are also contributions from other people. There is a social element to the individual’s resilience/grit/determination.

Anyway, resilience is the word stuck in my mind since day one of the conference. Resilience rooted in the strengths of the individuals behind the microphone, and augmented by the support they can rely on from the people around them.

Resilience is present in the stories of parents who do their best to create a better world for their sons and daughters when the society doesn’t offer enough understanding, let alone adequate support.

“I have been trying for years – if not decades already – to accomplish a complete change of system, to make policy makers and decision makers and service providers to understand the meaning of individual needs and individual services,” said Jyrki Pinomaa.

“For us as parents, it was clear that our son Markus would be entitled to a life of his own, just like his older brother and younger sister. When Robin was born, we understood both brothers would someday need a place to live, and they would move out of our home together. As a group of parents, we decided to start planning a house with our children as they approached adulthood. We had a clear, common goal, and a dream we were determined to make true. After 8 long years, it did.” 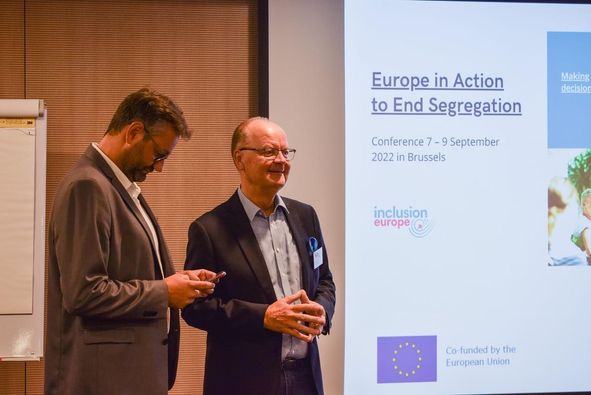 Resilience of self-advocates, survivors of institutionalisation

Resilience is very much present in the stories the self-advocates shared about overcoming segregation, and creating a new life for themselves. They too were able to do so thanks to their own strengths and determination, and thanks to the support they got from others.

And this resilience is reflected in how they are helping others to have the same opportunities. They know that overcoming deinstitutionalisation and segregation is not easy, and that having support from “outside” plays crucial role.

“I told you these stories to realise the gravity of the situation of people with disabilities in institutions. Now, I fight for the 16.607 people who are still in institution in Romania, and who deserve to live in the community,” said Elisabeta Moldovan 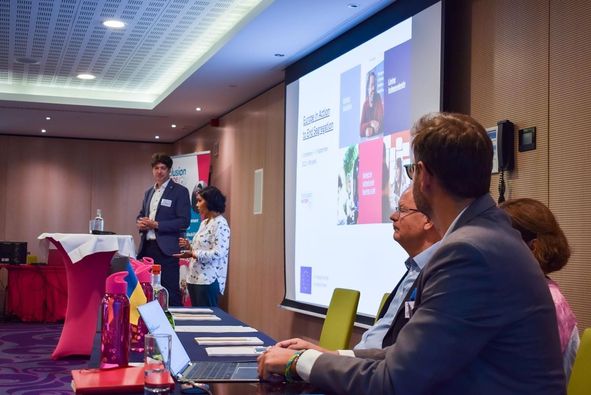 “What we need is for the government to listen to people with a disability. Because the government they say things, but they don’t do them. They said they would close institutions 12 years ago, but there is no moving on. I had to fight all my life, and it was a hard life. I wish for others to do the same things as I have done. Live a life of your own, live your life independently. Get education, get more experience, go to work,” said Paul Alford. 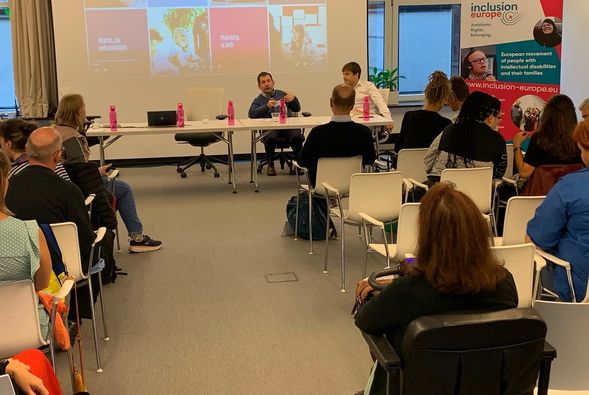 Resilience of the people of Ukraine

Resilience, needless to say, is present in what our friends from Ukraine shared with us too. About not only surviving in the face of brutal Russian war. But at the same time providing support to their sons and daughters with disabilities; Talking to the world media to make people understand what is happening; Helping thousands of other families and people with intellectual disabilities in Ukraine, including in Russia occupied cities.

“Our organisation provided the services for day-care for people with disabilities. 24 February changed everything. We could make a connection only with 45 out of the 210 families. Those families are the ones who left Mariupol and went somewhere else in Ukraine or another country. As for myself, we were living in the basement for 25 days, before I managed to get out of there, without food, gas, electricity.

I have deep, painful feelings with the families who stayed in Mariupol. People who are now in Mariupol don’t have enough food, appropriate medicine, suitable conditions of life. Unfortunately, 4 people with disabilities in our organisation died. A lot of people were taken to the Russian territory, and some were brought to psychiatric hospitals.

Such situation is not only in Mariupol, but also in other occupied territories. The buildings we used for our services have been destroyed completely. 90% of the buildings in Mariupol were fully destroyed and we know that there is nowhere we can come back. Fortunately, Ukraine is a big country with many cities, and we are glad the VGO coalition continues to work in other cities,” said Olena Kravchenko. 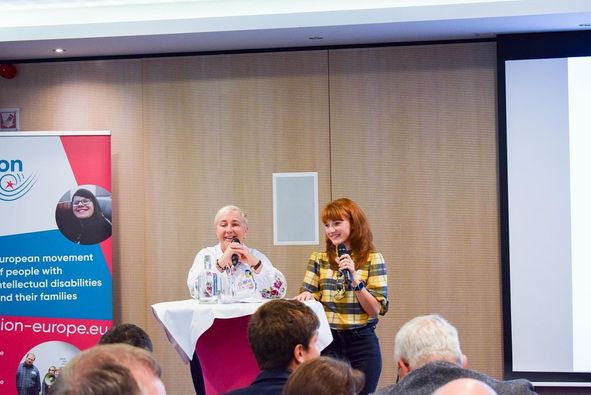 “Now, everything is closed. Some municipal centres are starting their services again, but not the NGOs. The VGO Coalition is helping to support around 14 000 families of children, and mainly adults, with disabilities.

It takes some resilience to work for years against an unfriendly system, to build something for the future of your son or daughter with disabilities.

It takes some resilience to shake off segregation, establish a new life, and to start helping others in doing the same.

It takes some (ehm) resilience to survive in a war, while providing support for your son or daughter with disabilities (and elderly parents too), as well as to thousands of others by organising and distributing help.

It takes resilience rooted in your individual strengths and characteristics, and augmented by the support from other people.

It may be useful to think about how public policies and services (our societies) help each and every-one to have both.

Oh, and I mustn’t forget: Stop calling people like this “vulnerable” please. They are anything but.