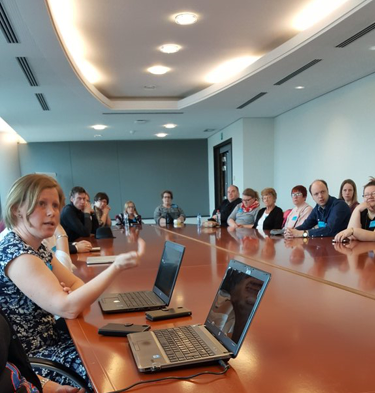 Members of FDUV and Steg för Steg at the European Parliament

What are the policy priorities of Inclusion Europe? How do we get information from our members? And how does the collaboration with Inclusion International work?

These were just some of the questions an energetic and highly interested audience asked when Inclusion Europe met with two of its Finnish members, FDUV (an organisation for Swedish-speaking persons with intellectual disability in Finland) and self-advocacy group Steg för Steg (also Swedish-speaking) in the European Parliament.

Inclusion Europe Director Milan Šveřepa gave an insight into the work of the organisation, specifically regarding the policy areas of legal capacity, inclusive education and independent living. These are legislated upon by the national parliaments, however, there are also ways to advocate on the EU level. For example, a way to promote independent living is to push the EU to not have funds used to finance segregation and institutionalisation.
Inclusion Europe furthermore facilitates discussion between member organisations regarding the aforementioned policy areas.

The right to vote – an important topic for the European elections

As for the topic of information exchange, the Europe in Action conference was mentioned, which this year takes place in Prague. The regular Director’s meetings as well as the newsletters Inclusion Europe receives from its members, and the Inclusion Europe newsletters are also ways of staying up-to-date. Inclusion Europe is always glad to receive information from members on projects to endorse or which might serve as an inspiration for other members. As an example, Inclusion Europe supported a campaign of its member Plena Inclusión on the right to vote. This issue will be of European-wide significance during the European elections. 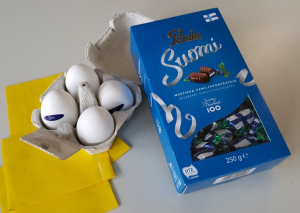 Milan Šveřepa also stressed the importance of EPSA, the European Platform of Self-Advocates. Members of EPSA are self-advocacy groups from all over Europe. Elections for the EPSA steering group will take place at the Europe in Action conference, and self-advocates who would like to stand for election are invited to write to self-advocacy@inclusion-europe.org to learn more. EPSA is part of Inclusion Europe’s internal efforts to be as inclusive as possible, and also is an important partner with regard to legal capacity and independent living.

At the end of the meeting, Inclusion Europe was presented with a special surprise – Finnish sweets! This included actual eggs which were filled with chocolate. Needless to say that they did not last long … Inclusion Europe would like to thank FDUV and Steg för Steg for the productive and insightful meeting. We are always happy to see you back in Brussels!