“Reforms to the Czech social care system are stalling. This harms people living in institutions”

Our director Milan Šveřepa gave an interview about the situation of people with intellectual disabilities in Czech institutions.

At the occasion, Czech daily newspaper Deník N published a 2-page interview with me plus an article reviewing the situation in the country. With kind permission of Deník N, what follows is an excerpt of the two pieces, translated into English:

Eliška Hradilková Bártová: Are people with disabilities in Czechia still being locked up in large-scale institutions, where their fundamental rights are being violated?

Of course. Segregation in institutions violates the fundamental rights of these people, which are guaranteed by Czech legislation. People with disabilities are to be included in society. This is impossible to achieve in an institution for 130 people, where at best they go for a walk in a group.

What is the current situation in care services for people with disabilities?

The system is still very much institutional. Over the past 10 years, despite all the investments, only about 10 institutions were closed and replaced by community-based services. There are still about 14,000 to 16,000 people with disabilities living in institutions, where they cannot take decisions for themselves as their lives are governed by the rules of the institutions. People there are only recipients of care, prevented from being active citizens.

It is often argued that most of the people in institutions would not manage to live included in the society. What is your stance on this?

This is complete nonsense. When someone says something like that, I often think of Senada Halilčević. She has an intellectual disability and spent some 20 years in institutions. Senada managed to get out of the institution, joined self-advocacy activities in Croatia, and eventually got involved with Inclusion Europe, where she served full term as Vice President. Senada travels throughout Europe and lectures at conferences. Whenever I meet her, I think back to all the discussions about „institutions being the best option for these people“.

And there are of course similar stories in Czechia. People who were forced to live in institutions, but could finally move out, find a job. And suddenly, instead of sitting all day aimlessly in the institution’s hall, they are active citizens, sometimes needing some help with some things.

What do you think is the worst aspect of living in institutions?

Helplessness, hopelessness, utter passivity. Institutions take away from people the possibility to decide what their lives will look like. It is about small things, such as when and what they eat, where they will go. At the same time institutions also take away the possibility to have normal relations with the outside world. Those people don’t know anyone else than other residents and the institution’s staff. They don’t have friends, they have no relations with neighbours, they do not have partners or relationships. They are losing out on things we consider completely normal. But if someone took these from us, we would really not like that.

What is the proportion of people who do not need to be in institutions?

Nobody should be in an institution. Institutions harm the development of children and adults alike. To do away with institutions is not about cancelling support people need. It is about ending a harmful way of organising support, and replacing it with new support services.

Most institutions in Czechia are run by the regional authorities. Which region do you think has the worst situation?

Update 30.8.2019: On 26 August The City of Prague has approved a plan to invest in community-based services to stop segregating people with disabilities and “exporting Prague citizens to far-off places”. (More in Czech)

How long would it realistically take for Czechia to replace institutions with community-based support?

There are already many community-based services on which the new system could be built. It is down to political will. I think if the decisions is taken, it could be done within 10 years.

You say that it could be done in 10 years, but the current situation is actually very similar to that of 15 years ago.

Unfortunately, that is more or less correct. But what has changed is that there are now examples of how to replace institutions. This shows that change is possible. There are also large numbers of community, protected housing and personal assistance services, which are often at a very good level.

So why are the necessary changes stalling?

Because the people who work in this system and who control it have found that such a change requires an effort. And when it turned out that it is doable, and some of the institutions were replaced, they worry the change could be for real. For some it is simply more convenient to keep the situation as it is.

If the fundamental rights of people are not respected by this system, should the situation be challenged in court?

This has already happened. For example, the Czech Constitutional Court has ruled people with disabilities have the right to support in the community. The basic legal framework is there, but it is being ignored.

Is the lack of progress in Czechia an exception?

Czechia has achieved significant changes nearly 10 years ago. Some institutions for adults with disabilities were closed and replaced with community-based services. More’s the pity these changes do not continue.

As I mentioned before, there are already many community-based services available. The new system could be built on these.

Isn’t the situation good, then?

In this respect, Czechia has some advantages. But it does not use them to get rid of the totalitarian heritage of segregating institutional care. Czechia today has relatively rich resources, it has a lot of experience, it can use European funding. The changes are not happening just because those responsible do not want to do anything.

Look for example at the example of psychiatries, where Czechia does a lot of interesting work right now. New community centres are being built, the reform has political backing. It is important to see that good things are happening. It is not impossible to achieve change. 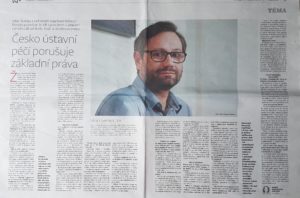 Situation in Czechia (as described in the article)

The reform of social care in Czechia remains at a standstill, according to experts and people with disabilities, who are forced to live in degrading conditions in facilities where their fundamental rights are being violated. The Ministry of Labour and Social Affairs, while acknowledging that the situation is not ideal, calls for patience.

In recent years institutions were renamed as “homes for people with disabilities”, but their very essence has not changed – such a “home” is still the same building in a remote area, often with one hundred or more residents prevented from living their own life within society.

“These are still institutions where peoples‘ fundamental rights are being violated,” according to Ombudswoman Anna Šabatová. “The transformation process was well designed, but it has stopped now. Political will is missing, as if the topioc has ceased to be an area of concern.“

There were 32 766 people living in institutions last year (not including children).

While the number of people in “homes for people with disabilities” has decreased by 26% in the past 10 years, in the “homes with special regimes” it is increasing. In 2015 there were 20 475 people in those “special regime homes”, last year it was five thousand more.