On 19 January, 8 men with intellectual disabilities were killed by a fire in a “care home” in Vejprty, Czechia. Another 30 people were injured. Messages of solidarity and concern about the situation of institutions in Europe came from all over the world.

On 19 January 8 men with intellectual disabilities were killed by a fire in a “care home” in Vejprty, Czechia. Another 30 people were injured.
Responding to this tragedy, Inclusion Europe, Inclusion Czechia and Rytmus expressed their condolences to the families of the victims and support to the survivors.
We also called on the Czech authorities to properly investigate reasons for such a high number of casualties, to provide support to survivors and to stop segregating people in “care” institutions similar to the one where the fire occurred.

Organisations and members of our board also expressed their condolences and solidarity:

Me and my friends @mencap_charity are sending our condolences in the respect of 8 people with a #LearningDisability, who were tragically killed in the fire. We call on Czech authorities to replace institutions with supported living and it helps with thier independence. https://t.co/uZPlhsP1uN

The European Disability Forum sent their condolences to the families of the victims while also expressing their concern about the continuous segregation of people with disabilities in institutions.

Members of the European Parliament express their support

MEPs Lucia Ďuriš Nicholsonová (from Slovakia) and Katrin Langensiepen (from Germany) expressed their support during the hearing of the Committee on Employment and Social Affairs.

MEPs Radka Maxová (from Czechia) and Mónica Silvana González (from Spain) also spoke about the tragedy and sent their messages of solidarity:

The reaction of the international inclusion movement

Inclusion International voiced the grief and concerns of the global inclusion movement:

We stand with Inclusion Europe, Inclusion Czechia and Rytmus in their call for the Czech authorities to act. Please help them to stop the institution being rebuilt and to demand that it is replaced with independent housing and community-based support by sharing their joint statement.

We also received messages of support and solidarity from the inclusion movement spread all over the world:

Sometimes when one person is absent, the whole world seems depopulated, how 8 people absent forever feels like only our hurting hearts can tell such a story.

For the souls of the departed 8 persons with intellectual disability to be happy, we ask Inclusion Europe, Inclusion Czechia and Rytmus to stand firm and strong in their call for the Czech authorities to act.

We require an action now.

This is really a tragedy. Such an incident would have been avoided had the authority taken precautionary measures. My heart goes with the family. May their souls rest in peace.

Please allow me to express my condolences over the tragic loss of the group of persons with intellectual disabilities in a fire at a care home in Vejprty, Czechia. One always struggles to find the right words to say in situations like these, and I’m afraid I’m no exception to that rule.

While I’m sure it sometimes feels like the family members will never be able to recover from this shock and devastation, please know that they will someday pull out of this. They have the help and support of their friends and family, and we all know what courageous persons they are.

You have all my sympathy, but more importantly, you have my love, respect and friendship.

May their souls rest in peace.

We are sorry for this loss. We are very sad for all those touched by this tragedy. We agree that it is a situation where we are not heard. Wishing you peace as you grieve this loss.

On behalf of Inclusión Panamá and the panamanian people, we express our condolences for this tragedy. We wish that research shows the truth. The rights of our people with disability are not negotiable. We pray for victims and their families.

On behalf of Down Syndrome South Africa and its members we convey our deepest condolences to the families and friends for the tragic loss of their loved ones, we also wish a speedy recovery for those who were injured. We support the call to respect their rights to full inclusion and to house the residents in their communities with support.

Inclusion Europe wishes to thank everyone for their solidarity and compassion towards the victims of this tragedy.

We will continue to fight for the rights of those affected by the fire, as well as for the thousand more people with intellectual disabilities segregated in “care” institutions in Czechia.

We expect the Czech authorities to fulfil their obligations and to end segregation once and for all. 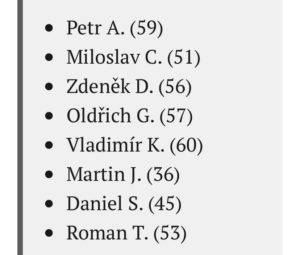