“EU funding in Czechia should be used differently”

Last January, Inclusion Europe's Milan Šveřepa was interviewed by David Klimeš for the Czech news-server Aktuálně.cz. They talked about deinstitutionalisation, rights of people with intellectual disabilities and the use of EU funding to improve the social system in the country.

Early in January 2020 I was interviewed by David Klimeš for the Czech news-server Aktuálně.cz. We talked about deinstitutionalisation (or lack of), about rights of people with intellectual disabilities and about the use of EU funding to improve the social system in the country.

What follows is an edited extract:

Why does this idea that people with care needs belong to institutions prevail to this day? 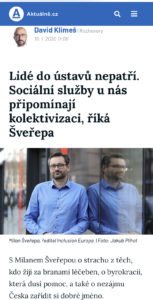 The online page with the interview

People who are being placed in institutions are still not taken seriously. They are just objects of care – nobody is bothered by them having normal human aspirations.

It’s very similar in many respects. The approach is all about one-size-fits all, bulk solutions, as if there isn’t a problem that cannot be resolved with some concrete and a new office for someone.

Progress on deinstitutionalisation is slow

Let me just remind you it is 2020, thirty years after the fall of communism. Perhaps we made some progress?

1989 did not reach much to the “care” institutions system. Institutions remain as some posthumous extensions of the late socialist system. They provide shelter and fill the stomachs, but nobody cares about personal needs and desires, and about their actual realisation.

Progress on deinstitutionalisation is very slow then?

It is slow. On the other hand, Czechia has quite a lot of very good community-based services, especially compared to other countries in Central and Eastern Europe.

There have also been some efforts to close institutions for adults with disabilities, and some regional governments have made real progress, for example the Moravskoslezský region. (Read about deinstitutionalisation in regards to children with disabilities.)

The progress made in reforming the psychiatric care in the country is very interesting as well.

Rights of people with intellectual disabilities

What rights and changes does your organization advocate for?

Inclusion Europe represents people with intellectual disabilities and their families. A key issue for us is the abolition of segregation in “care” institutions and their replacement with support in the community. Another issue is the prevailing denial of the right to decide. There have been some good changes in Czechia, but overall people are still being denied legal capacity frequently.

What does it mean to have legal capacity denied?

It can mean small but important things. You cannot buy anything, because you are not allowed to handle money.

It also means not being allowed to own and handle property, resulting in a situation where parents would want to give their daughter or son their own flat or house to live in, but they are not allowed to do it.

And finally, people who are denied legal capacity in Czechia are also denied their right to vote. All these issues must improve.

EU funds should be used to reform social services and employment

There will be a new EU budget soon, including for social programmes. How should the funds be used in Czechia?

Of course, to continue the transition from institutionalisation to community-based support, and also to prepare for an aging population.

It is not possible to continue with this approach that once you get to old, you will end up in an institution. Nobody wants that either.

So, while deciding about these investments, questions must be asked such as: Do we have accessible public spaces and housing? Are flats suitable for those who have difficulties in mobility? How do we deal with loneliness? etc.

Also, Czechia has had for a long time the lowest unemployment rate in the EU. But this situation has not been used to help those outside the labour market to integrate. EU funds should be used to address this situation with trainings and other targeted support.

This interview was published only a few days before 8 men with intellectual disabilities were killed by fire in “care home” in Czechia. Read Inclusion Europe reaction to the tragedy and an interview I gave after it. 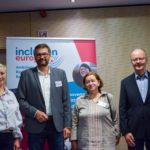 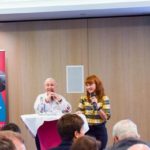 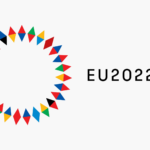 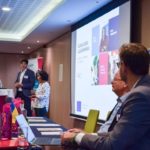