Our focus in 2020 is inclusive education!

Inclusion Europe > Educate
That's what I learned - inclusive education for all! 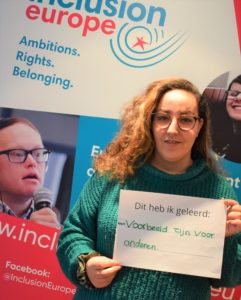 Children, teenagers and adults with intellectual disabilities want to learn and gain knowledge in new areas in places where their needs are met and where they are included. Unfortunately, far too often their ambitions are restricted everywhere in Europe: They are sent to special schools, separated into segregated classes or prevented from accessing further education.

This violates their rights established in the UN Convention on the Rights of Persons with Disabilities. However, it does not only hurt people with intellectual disabilities themselves, but society as a whole: If children do not get to know pupils with disabilities at school, how are they supposed to accept them on an equal basis later in life? If we make segregation based upon “performance” our standard, what message does this send to everyone who cannot “keep up”?

Children, teenagers and adults with intellectual disabilities have a lot to offer, e.g. their unique life experiences, as well as unusual ways of addressing problems and of looking at things. With the campaign #ThatsWhatILearned, Inclusion Europe wants to raise awareness about ongoing discrimination against people with intellectual disabilities in European education systems. We want to showcase good practices and initiate discussions on how we can make inclusive education happen everywhere in Europe.

During the campaign, we will put the focus on the experiences of children, teenagers and adults with intellectual disabilities. And we will ask students, teachers, Members of the European Parliament and others about their learnings.

Do you want to show how inclusion at school works? We would love to hear from you! Would you like to point out where there is still a lot to catch up on? We also invite you to take part – in Inclusion Europe’s campaign “That’s what I learned”!

Up for an interview?

What are your experiences with inclusion at school? Did you do research on the topic? Inclusion Europe wants to hear from you!

Please get in touch with us at secretariat@inclusion-europe.org if you are

Here you can find campaign material in different languages, namely the campaign description, sheets of paper and the picture release forms.

Sheets of paper on “That’s what I learned”

Read about our campaign in easy-to-read!